Most banjos come in open-back or resonator-equipped options. Resonator banjos come with a plate attached to the body. This plate is also known as the “pot”. The resonator plate is used to project the sound of the banjo forward. This gives the instrument more volume in ensemble settings. This is why bluegrass musicians and many other banjoists choose resonator-equipped banjos.

Open-back banjos have a softer, more mellow sound and can be used in quieter environments. Because they are simpler in construction, they often weigh less and cost less than resonator-equipped banjos. Fans of American Old-Time Music love open-back 5-string banjos. They are often played with variations of the clawhammer technique.

The majority of banjo bodies today have a circular wooden rim around the body, and a tensioned head made from synthetic material. This looks a lot like a drumhead. Modern heads don’t react to temperature or humidity like older banjos that had heads made from animal skins and membranes.

The banjos of today have four strings made from metal, with the fourth being covered in an alloy. Sometimes, nylon strings can be used to create a more mellow sound.

The banjo tuners are different from the worm-gear-based tuners found on guitars. They can be either planetary-gear or friction-type tuning pegs. A quality banjo will have smooth operation, allowing for easy tuning and stability. 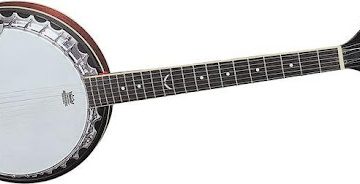